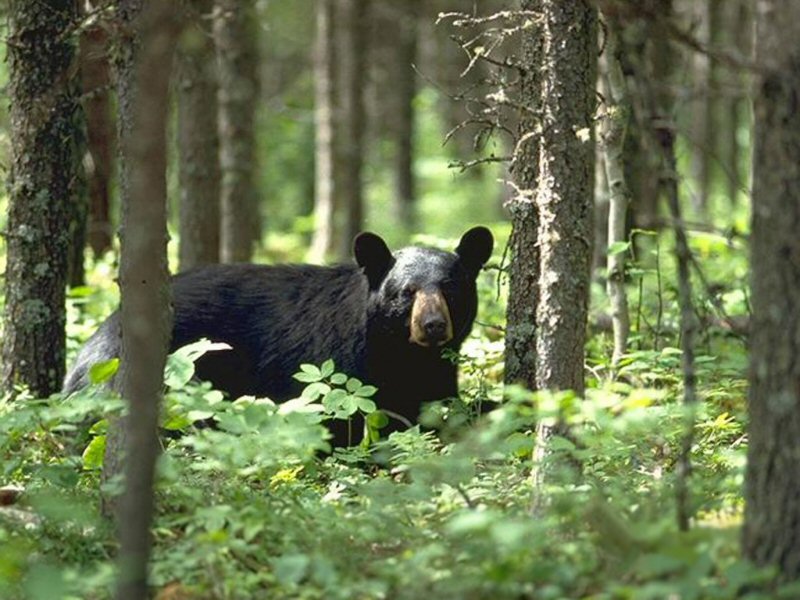 North America’s wild predators are an undeniable hazard to outdoor survival! Resident predators like the black bear, grizzly bear, coyote, wolf, and cougar all pose a threat during any wilderness survival situation. Although encounters from predatory wildlife are rare in the wild, an understanding of their potential danger is important when travelling afield.  Knowledge is power in any survival situation, so let us take a look at North America’s top predators and what to expect in an wilderness situation. 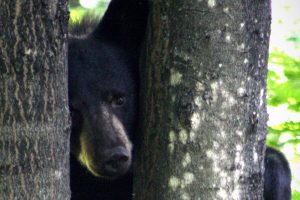 Black bears account for more attacks on humans than all other predators combined.  Looking at fatal attacks historically there are, on average, one to two fatal black bears maulings each year, along with many other negative encounters, making them of concern for anyone who spends time in the great outdoors.

Found in every Canadian province except for Prince Edward Island, and every US State apart from Hawaii, Ursus americana or the common black bear are wide-ranging and prevalent. Predatory male bears are of greatest concern since they account for more than 90% of all fatal black bear attacks. You have all heard stories of the sow bear with cubs and the danger they pose however, attacks involving female bears usually end without dire consequences. Lone males, or predatory males, are the bears to be concerned with. There are precautions you can take when afield in an emergency survival situation, including; travelling in groups, making noise on backwoods trails and stowing food supplies away from your sleeping area. This lessens the chance of an approach from a marauding bear; though history has shown predatory males are often more concerned with larger prey than food scraps. A cooler of hamburgers and hot dogs may not suffice and may  not be the target of a potential attack. Case in point:

In  1991, two campers on remote Bates island of Ontario’s Algonquin Park, returned to their tent one afternoon with supplies, and were greeted by a large predatory male bear. The bruin completely disregarded their bags of fresh food instead focusing on the campers themselves. It is grotesque to fathom, but when the couple did not return as expected, officials discovered their mostly consumed bodies a short distance away. None of their food supply had been touched.

When I travel bear country as a licensed gun owner, and hunter, I have a firearm and pepper spray with me at all times.  I have seen first-hand the danger a black bear can cause, often in an unprovoked way so I want to be prepared.  To suggest having a firearm with you may sound harsh but under provisions of the Fish and Wildlife Conservation Act, it is within our legal right and power to protect ourselves and our property at all costs.

The approach of a predatory male bear is usually silent and you may not realize that a large omnivore is even stalking you. Wilderness survivalists are most at risk since primitive shelters and tents offer little protection from a charging bear.  Always be aware that black bears are in the vicinity and if approached by a large black bear you identify as male, you must stand your ground, announce your presence with loud clapping and yelling. If the bear continues its approach , make yourself appear larger than you are, bang a tree with a stick or clap two rocks together. Most times the bear will back down if you convince him you are a formidable adversary.

In the case of a sow with cubs, the passive survivalist approach is far different.  Mother bears is most concerned with the welfare of their cubs, so it is best to give them room. Slowly backing away is the best course of action. Never turn, run, or attempt to climb a tree when confronted by a black bear. They are agile climbers and this tactic may trigger an attack. If a sow with cubs is moving away from your position, continue slowly backing away and exit the area. There are scant few fatal attacks involving a sow with cubs in North America. A University of Calgary, Alberta bear study showed that 92% of all predatory bear attacks involve male bears.

Fifteen years ago while deer hunting in the mountains of Quebec, I came upon a loan black bear 100 yards in front of me, during a deer drive. The bear did not realize I was there because of wind direction, and my presence startled him. In a split second, the bruin swivelled and charged straight at me. My mind was racing with visions of bear attacks I had read about, and I instinctively clapped my hands and stood my ground. The bear got to within fifty feet of me before halting and changing direction. I had luckily convinced this male bear, in the last moments of his charge, that I was a formidable adversary and he chose not to attack. Bear encounters are rare as mentioned, but they do occur as I discovered. 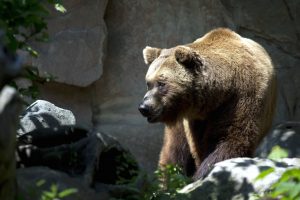 The Grizzly or brown bear, Ursus Horribilis, as they are known scientifically is a different beast from its smaller cousin. Famous for mock charges on humans, grizzly bears pose an undeniable danger when spending time in Western Canada or the Pacific Northwest. Although Grizzlies do account for less attacks on humans, that is partially due to their distribution since they are a beast found only in the west. Because of their immense size and power, an attack from a grizzly bear is always a dire situation. It is very difficult to determine a sex of an adult grizzly unless, of course, a sow and cubs are seen together.

It is even more important to carry a firearm and/or bear spray for protection, when travelling in “Grizz country”, provided it is in your legal right to do so. (Please refer to regulations for your state, or province, regarding firearm possession.)

If you should meet a grizzly on the trail, or in your survival camp area, do not run, retreat quickly or attempt to challenge the bear. Announce your presence, and if the Grizzle appears to be moving away from you, allow them to space to do so. As mentioned, Grizzlies are famous for mock attacks when startled, and may charge at you, only to halt a short distance away or veer off to one side at the last minute. It is difficult to determine when a grizzly charge is the real thing or a mock charge.  To protect yourself, stand behind a large rock or clump of trees and do not bolt if charged.  The bear may decide you are difficult prey and leave the area on its own. 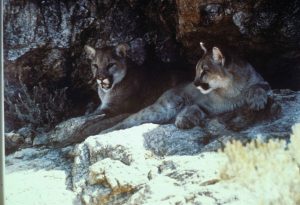 Another large predatory animal found mainly in the west, is the cougar or mountain lion.  Human encounters with cougars are, as with black bears and Grizzlies, extremely rare, however there have been documented cases of attacks.  A large male cougar can weigh more than 180 pounds and are one of the stealthiest hunters in the natural world. Cougars are excellent climbers and extremely agile predatory hunters. Fortunately, they are usually more concerned with smaller prey animals but understanding that a cougar attack is possible is cause for concern.  Arming yourself again with a legal firearm and pepper spray is suggested for cougars as well.  As with bears, having a clean camping area will lessen the chance of an encounter but we also should always be on the watch for these large cats. 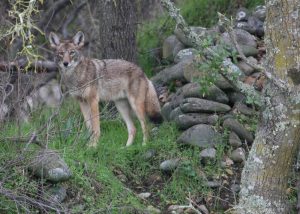 The danger posed by coyotes in North America has increased greatly in the last decade, mostly because of  burgeoning populations of wilderness coyotes and urban coyotes as well. Perhaps the most adaptive predator of all, the once solitary coyote of the western prairies weighing 30-40 pounds has evolved into a much larger and more dangerous beast. Evolution and adaptability have seen the coyote expand its range into all areas of North America.  Hybridized versions of the coyote and the larger eastern coyote, coywolf and other hybrid forms including feral dogs make this super beast one of the greatest predatory concerns today.

Coyotes are partially responsible for the downfall of the timber wolf in North America.  Posing a genetic mix and hybridization with the northern Timber wolf, the coyote of today is found in nearly every neighbourhood and has even adopted ‘pack like’ hunting traits, travelling in groups of 4 and more.

Although few coyote attacks have been documented, the shocking fatal attack on a young singer from Toronto, Ontario, proves that Canis Latrans is capable of killing. Taylor Mitchell, 19, was attacked and killed by 2 coyotes in 2009 while travelling in Nova Scotia’s Cape Breton area.

Coyotes are ferocious eaters, stealthy hunters and their numbers have exploded.  Protecting yourself in the event of a coyote attack should be handled in the same way as with other predators such as bears and cougars. Store food as far from your shelter as possible, watch for signs of scat and tracks in your camping area, and be aware that these nocturnal and crepuscular hunters are always on the lookout for an easy meal. 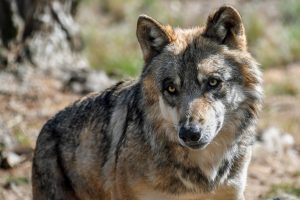 The timber or grey wolf is an imposing beast indeed.  Although very rare and dwindling in numbers in most regions, those who travel the Northwoods should always be concerned about wolves. They are famous pack hunters, highly territorial with a defined hierarchy within the pack.  Though the dangers posed by wolves are less than other predators due mainly to their low numbers, we should never take these predators lightly. Wolves are capable of taking down large prey and are perhaps the most intelligent predatory known to man. Ask any trapper and they will say capturing a wolf is the most difficult of any furbearer.  These large animals are super intelligent, extremely capable and can easily kill a human, though it is extremely rare. Being aware that wolves are present is the first step in protecting yourself. There are drawn by the presence of large prey animals and the smell of fresh meat, so having a clean survival camp is a must.

How To Spool a Spinning Reel: Our 7-Step Process 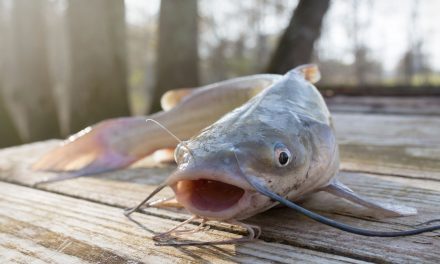 10 Best Catfish Fishing Lakes in the US 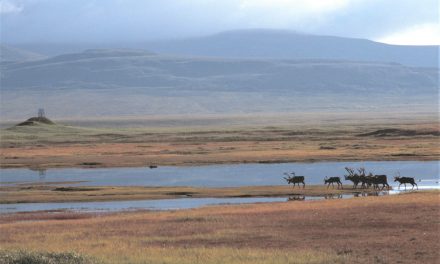