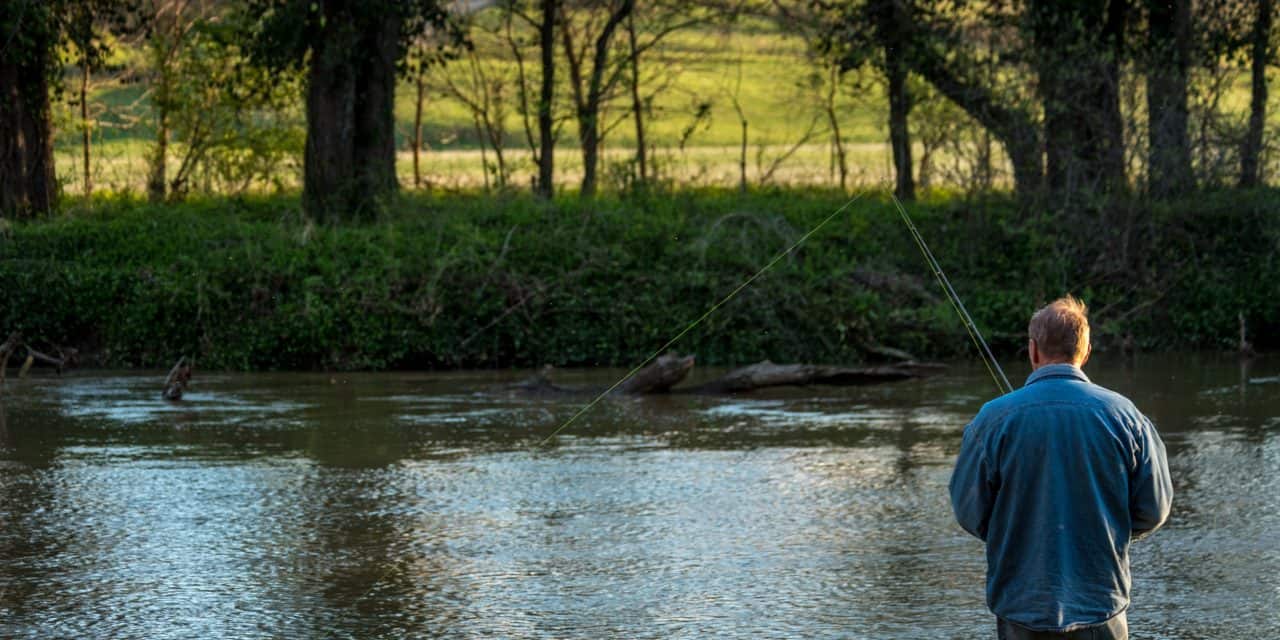 At Hook and Bullet, we thrive to provide anglers with all the hottest gear, reviews, and intel to land the big one. It may come as no surprise that through our research, we have accumulated privileged insight into where anglers are landing fish and where anglers aren’t. As such, here is our exclusive list of the top fishing spots in the US from Hook & Bullet’s Angler.

Pagosa Springs offers prime fishing in Colorado with lakes, rivers, and reservoirs that are all connected. It’s impossible, to leave without catching anything. With the variety of waterways, you can go fly-fishing on one body of water and cast a fly on the next.  Due to the unique topography of Pagosa Springs,  the lower elevations can produce species such as catfish, bass, panfish, and perch. Alternatively, at the higher elevations of the San Juan Mountains, anglers can snag a pike, kokanee salmon, and many varieties of cold water-loving trout.

Of the most notable spots is Born’s Lake, which is only 14.3 miles from Pagosa Springs and offers anglers the opportunity to catch a brook trout or rainbow trout. Anglers have success with both a fly rod and using a spinning reel setup. However, if you’re sticking to fly-fishing you want to try nearby Himes Creek, Allen Creek, or Hatcher Lake.

Expanding over 1,200-acres, Mackay Reservoir is an anglers’ playground. No matter where you cast, the opportunities to land a bass, channel catfish, bluegill, yellow perch, and common carp are all possible.

A hotspot can be at found the northern tip of the reservoir at Mackay Dam. Anglers have been successful here catching yellow perch. On the opposite side of the reservoir near Mackay Creek channel, anglers can snag a catfish or fish in the submerged wood for crappie or perch. Alas, catching largemouth bass is a bit of a rarity at Mackay Reservoir, but when one does hit your line, don’t be surprised by an 8 lb monster. 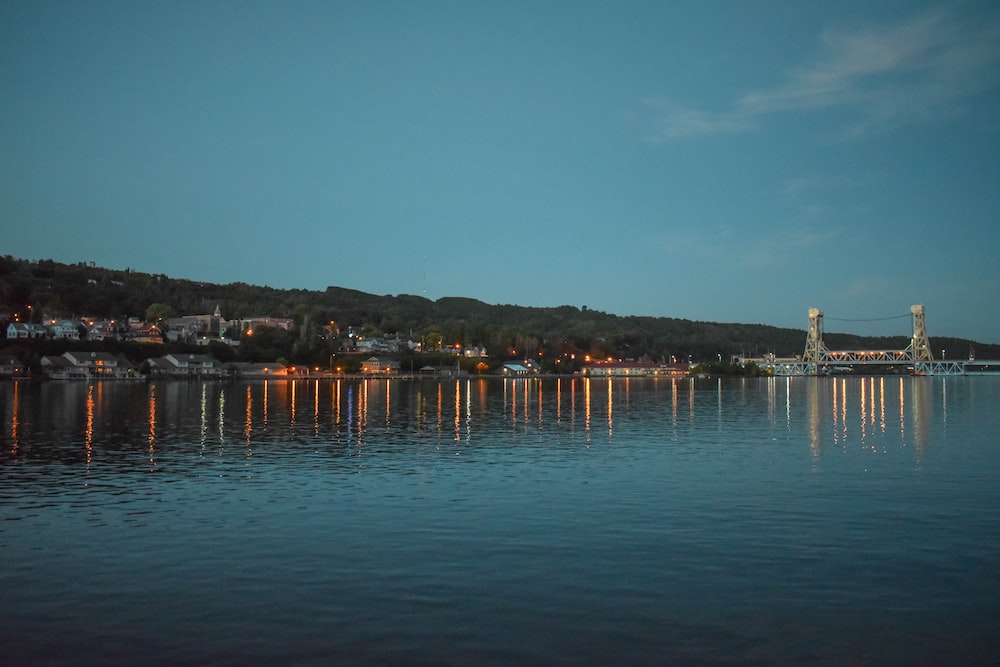 Portage Lake is a large lake found in Houghton, Michigan, and is commonly referred to as the Portage-chain-of-lakes for the many lakes that are connected by canals. Additionally, these canals open to Lake Superior, so whatever may land on your line, is a mystery. It covers an area of 9,640 acres and offers a variety of target species. Species such as northern pike, lake sturgeon, rainbow trout, rock bass, smallmouth bass, yellow perch, walleye, splake, smelts, and suckers.

Within the chain of lakes and canals are excellent fishing spots such as Torch Bay, Dollar Bay, and Sturgeon River. Most of which are best fished from a boat.

Alas, Zimmerman Pond is a producer of monster largemouth bass, with lake fighters as large as 7-8 lbs, with some anglers reporting bass as large as 9lbs. Compared to other lakes on this list, Zimmerman Pond is small, but that doesn’t mean the fishing isn’t good, just ask any of the local anglers, who aren’t shy to post their monster catches.

The longest man-made fishing pier in the world can be found 5.3 miles outside of Galveston, Texas. The Texas City Dike is a popular destination for anglers to launch their boats to gain access to the Texas City Channel and Inner Bar Channel. There are facilities in the place, so if you do catch something there are fish cleaning stations, washrooms, and picnic shelters. Popular species include speckled trout, redfish, sheepshead, and flounder.

6. Lake of the Ozark – Ozark, Missouri

Lake of the Ozarks has risen to notoriety as a top-tier producer of catfish, with blue catfish hitting lures all year round. Other target species include bluegill, crappie, and walleyes. Among the less common species are smallmouth buffalo, muskies, and freshwater drums.

The lake covers over 54,000 acres and its sizes see three unique sections with the upper lake being more shallow, the middle being the clearest, and the lower end of the lake is the deepest. Alas, areas, where anglers have struck it big, include Autumn Lake, McCoy Branch Cove, Middle Hollow Cove, Fork Hollow Cove, and Dry Branch Cove. In fact, at its deepest points, Lake of the Ozarks can hit over 130 ft deep. Nevertheless, Lake of the Ozarks holds a number of state records for the following species bighead carp at 80 lbs, freshwater drum at 40.8 lbs, muskie at 41.2 lbs, smallmouth buffalo at 36.1lbs.

On a map, Reelfoot Lake can be found in the northwest corner of Tennessee. Most of Reelfoot Lake resides within the Reelfoot Wildlife Refuge. As such, there are many locations to launch a boat from on the lake and there are a number of islands to troll around. If trolling, popular areas are Green Island, Carney Island, Rat Island Pocket, and Eagle Nest Timber. Jigging and three-way swivels are ideal to target crappie and bluegill. As such, these species can be found around Swan Basin and Moultrie Field.

Reelfoot Lake does permit the usage of trotlines. There is an abundance of catfish in the lake, with an estimation of 400 per acre. Moreover, multiple trotlines are in allowance, but anglers must not exceed 100 hooks.

Guntersville Lake is Alabama’s largest lake and covers an astounding 69,100 acres. It is fed by the Tennessee River and has a number of tributaries. It is known to anglers for its quality bass fishing, but other species include black crappie, smallmouth bass, spotted bass, striped bass, white bass, bream, and catfish. 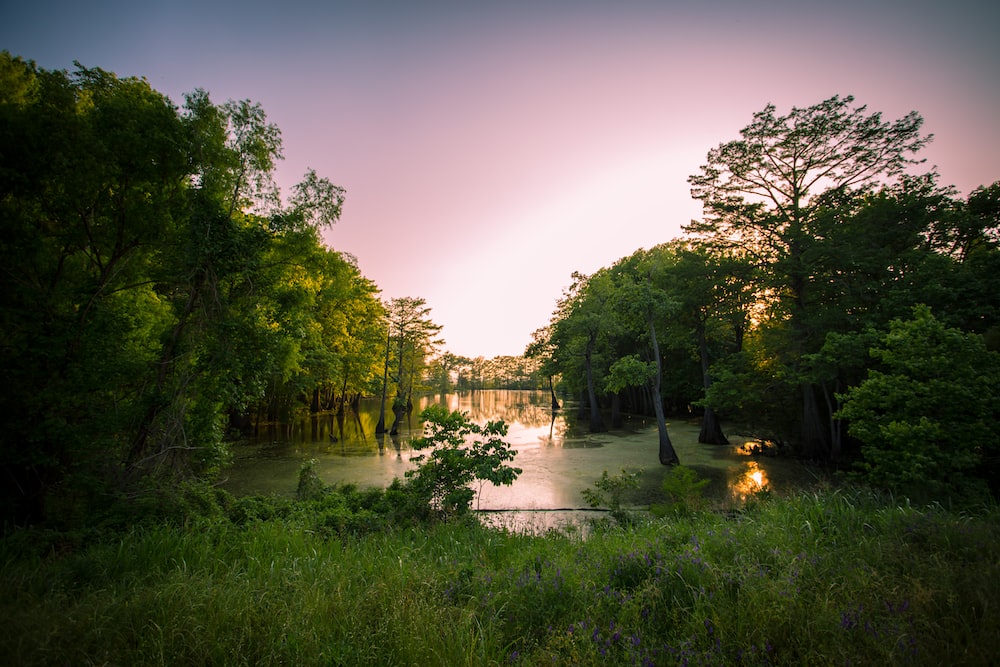 The Mississippi River is the second-largest river in North America and the 13th largest in the world, running 2,340 miles long. Due to its vast size, it has produced trophy fish and record-breaking fish in multiple states. Commonly caught species include largemouth bass, channel catfish, flathead catfish, blue catfish, bluegill, walleye, sauger, white crappie, and black crappie.

No matter where you put your line, you’re guaranteed to get a bite. The 20-acre Lake Boutin and State Park offer excellent shore and kayak fishing for bluegill, walleye, and crappie. The further south you head on the Mississippi River, the more deep pockets occur in the river beds. Thus, it’s these features that make it a prime spot for noodling or fishing catfish. It’s no secret that the Mississippi River is the king of the catfish. Blue catfish can be found in the current, with channel and flathead catfish resting in calm water or deep pockets.

Rend Lake is infamous among anglers as a premiere destination for trolling and hitting lively bass. At 162 miles long and the average depth is 15 ft, anglers will be keen to hook a number of species. These include bluegill, channel catfish, crappie, carp, buffalo smallmouth, drum, shad, yellow bass, flathead catfish, hybrid striped bass, largemouth bass, and white bass. In the state of Illinois, Rend Lake is recognized for its bluegill action.

On the other hand, with a massive largemouth population Rend Lake is home to many tournaments and youth tournaments that take place on the weekends at Sailboat Harbour, Gun Creek South, and North Marcum to name a few locations. In fact, in the year 2021, with 75 largemouth bass tournaments held an impressive 3,700 largemouth bass were caught. Nevertheless, 500 crappies of various species were tallied during tournaments. Besides, Rend Lake holds the current state record for the largest black crappie caught, which weighed in at 4.8 lbs.

Part of the Cypress Creek River Basin, Lake O’ the Pines is a reservoir that is located 8.8 miles west of Jefferson, Texas. It may be known as the prettiest lake in the east. But this 16,919-acre lake is a producer of redear sunfish, bluegill, crappie, flathead catfish, white bass, blue catfish, largemouth bass, and pickerel.

The lake has multiple spots to launch from, including marinas. There are also campsites found around the lake that makes for an excellent weekend of family fishing. If you don’t own a  boat, don’t sweat it, there are vendors who offer motorboat or kayak rentals. Furthermore, Lake O’ the Pines attracts many tournaments, from the Abu Garcia-sponsored Phoenix Bass Fishing League to Big Bass Bonanza. There is no spot that is better than another on this lake, with minnow and jigs being proficient near reeds and shallows for panfish and bass. If you’re targeting catfish, try cutbait or cheese on the rocky drop-offs. 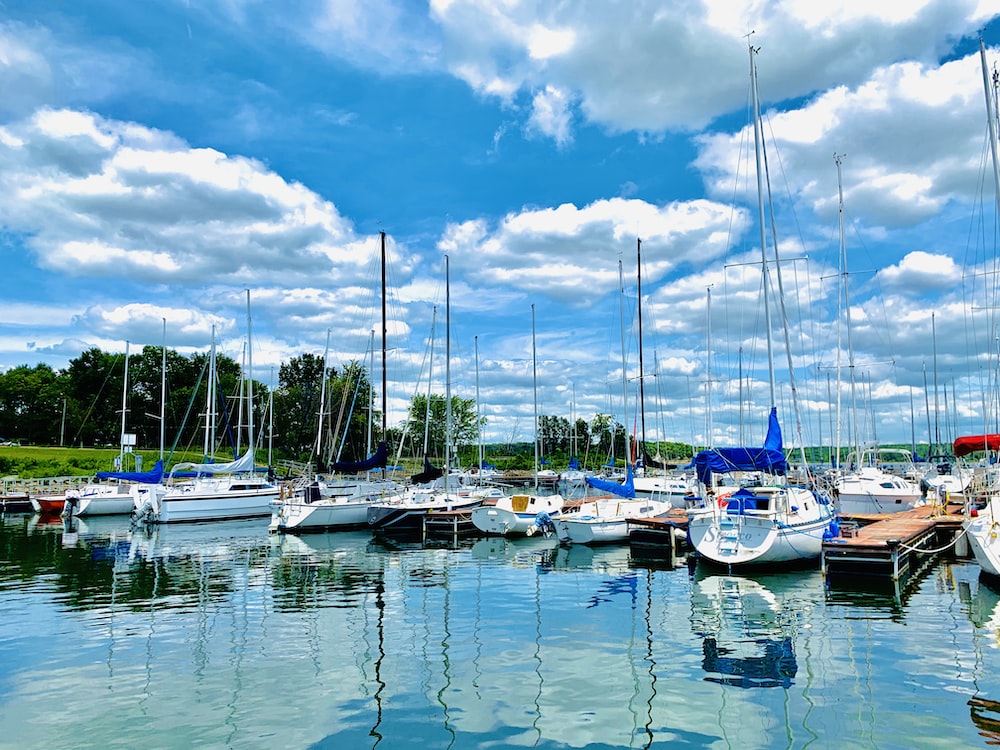 Stockton Lake is a multiple record holding lake, which adds to its appeal of being a top catfish producer. The lake covers a vast 25,000 acres with 300 miles of shoreline. Common species include crappie, black bass, white bass, largemouth bass, smallmouth bass, walleye, bluegill, and catfish. However, anglers may be surprised to learn that Stockton Lake is a hidden gem when it comes to catching walleye. Furthermore, it’s been dubbed one of the best walleye lakes in the American Midwest.

The aforementioned is the number of state records that this body of water holds.  Such as a green sunfish weighing 2.2 lbs, northern pike weighing 18.9 lbs, a smallmouth bass weighing 7.2 lbs, and a tiger muskie weighing 22 lbs. Locations, where anglers have hit it big, include Stockton Lake Dam, Miller Branch, Crabtree Branch, and Cothwell Branch.

Another record-producing lake found in Missouri, Table Rock Lake, is the cream of the crop when it comes to catching catfish. Covering an impressive 43,000-acres, it’s mostly found within the state of Missouri.  However, it expands into Arkansas state. Alas, Table Rock Lake has a depth of approximately 220 at its deepest point. When it comes to target species, Table Rock Lake has a variety. From largemouth bass, smallmouth bass, spotted bass, crappie, paddlefish, bluegill, and of course catfish. The lake has an impressive resume of state records including a paddlefish weighing 139.4 lbs, spotted bass at 7.8 lbs, and white bass at 5.6 lbs.

When it comes to fishing spots, anglers have been successful at the confluence of Flat Creek and James River, the Table Rock Dam, to the south or west of Branson, or along the reeds in the shallows. 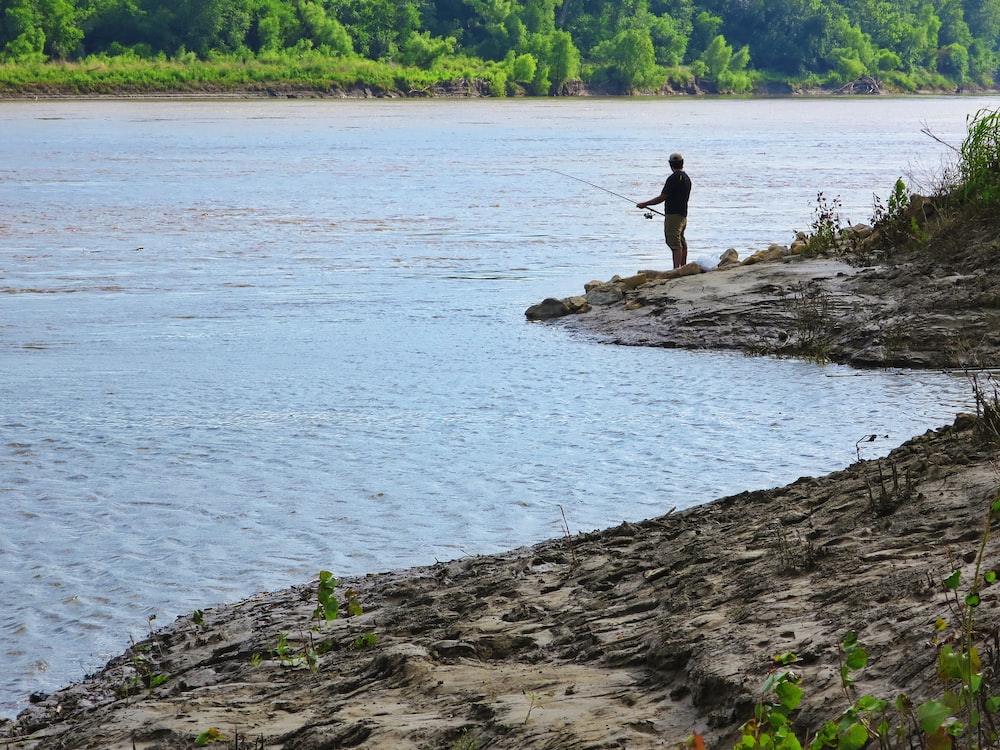 When anglers think of Montrose Lake in Missouri; catfish come to mind. In fact, Montrose Lake holds the state record for the largest flathead catfish caught at a whopping 77.8 lbs. As such, Montrose Lake encompasses an area of 1,500 acres and there are many boat launches available throughout the lake. Among species are white bass, channel catfish, flathead catfish, and largemouth bass. Moreover, anglers have been successful around the generation station. Here, the water is fast and warm all year round and catfish are frequently caught. In shallower areas closer to the shore, there are reeds, which offer ample opportunity to pursue panfish and baitfish.

And the Best US Fishing Spot is…

This answer may come as no surprise but all of them. Each body of water is unique in terms of topography, climate, species, and type of water, each destination is exceptional for there own reasons. So, there you have it, our list of the top US fishing spots. With many states and reasons to fish, it’s no wonder why the US has many sought-after fishing spots by anglers of all ages. When planning your next fishing trip, consider one of these top-notch fisheries, and perhaps you too can land a state record-breaker. Further, if you’re looking for a trophy now you know where to land the big one with this list of US fishing spots. 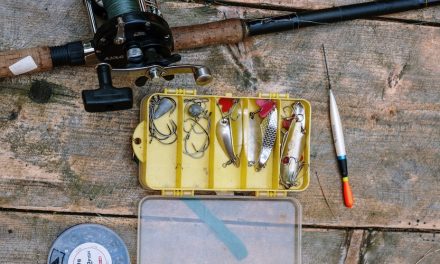 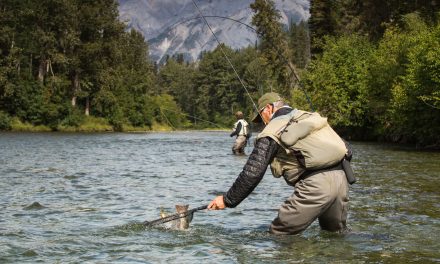 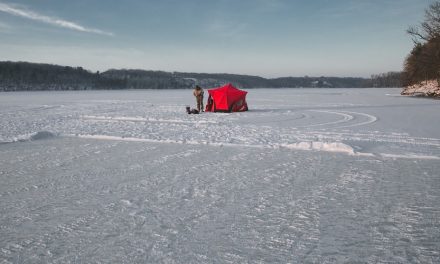 Essential Ice Fishing Gear for 2021: 15 Item To Get Started