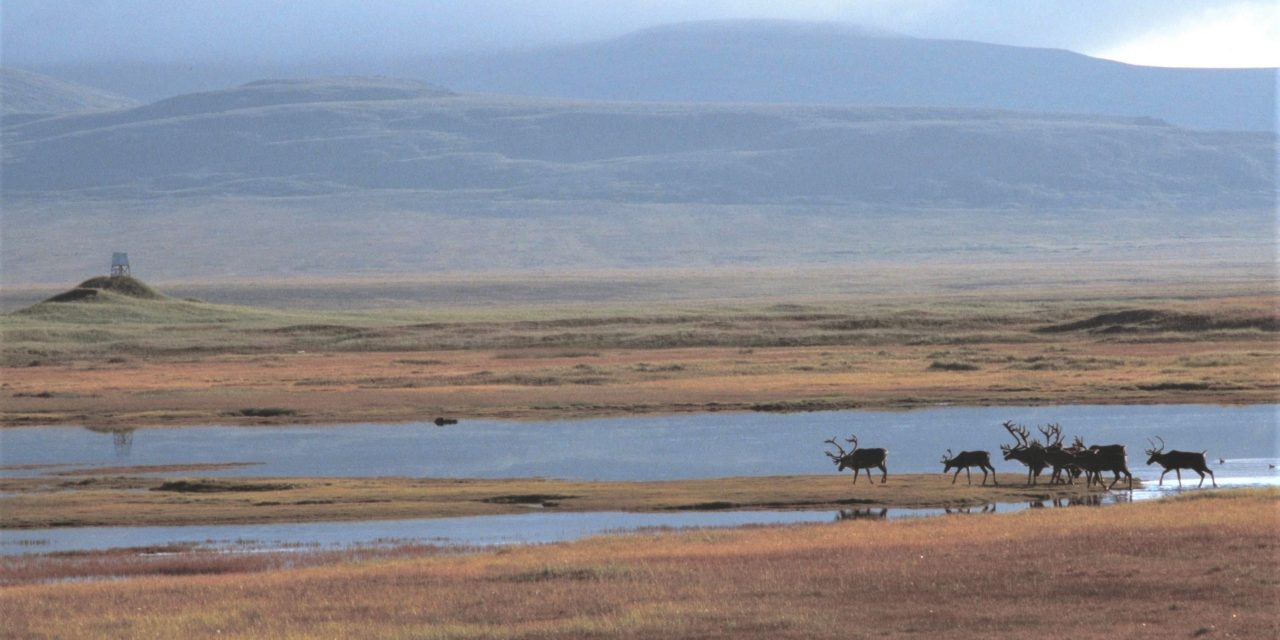 For the average North American big-game hunter, travelling to Canada’s far north in pursuit of the majestic caribou is often little more than a dream.  Truth be told, most hunters will never step foot on the tundra but for the fortunate few, like Jim Parker of Gaines Michigan, a journey northward can prove to be a dream come true, with a few hurdles along the way. Join us on a tundra adventure in search of trophy caribou! 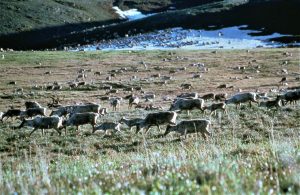 Jim Parker had aspirations of a hunting adventure in northern Quebec, and after hours or tirelessly outfitter researching, organizing the ideal hunt party, and even waiting an extra year to hit the road, it finally came to fruition.

“My chat with Kathy Nolan of Safari Nordik was a conversation I’d rather forget”, Parker recalled.  “When I found out the caribou herd was not cooperating, and we would have to wait yet another year, I thought my life had come to an end,” Parker lamented.

That winter, Jim eased the boredom by reading about other hunter’s successful adventures in magazines.  Finally, the big day had arrived.  This time he was not about to remain seated at home in Michigan. It was Northern Quebec or bust for him, and he promptly rounded up his hunt party.  Fellow hunters Jack Homsher and Tom Robinson from Phoenix, Doug Caldwell from Wisconsin, Al Livingston from Missouri, and Gene Wheeler and Mike Parr from Michigan were the final crew heading north.

The lengthy but scenic trip to the Ungava Bay region of ‘Nouveau Quebec’ was uneventful, the way most travellers would want it to be.  Parker was not ready for any more surprises at this point and while the plane neared camp, Jim’s heart began to race at the thought of miles of moss covered terrain and of giant herds of caribou. 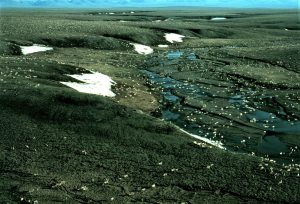 Once settled into the remote outpost camp, Parker was introduced to a guide by the name of Perry, who was given the unpleasant task of updating the men on local hunting conditions.  “Looks like we’re gonna have to work for these caribou boys, there are not too many around these days, “he stated bluntly.  Jim Parker’s heart began to sink once again, as he feared the worse.

That first morning walk on the lichen-packed terrain was a real eye-opener for Parker.  He was instantly awestruck by the rugged beauty of this northern land.  A brisk wind clipping off the Leaf River sent chills down his spine, as the motorboat pulled away from shore.  It was not long before the guide’s face lit up with excitement, and he redirected the boat sharply towards shore.  “There’s a small herd running the edge over there,” Perry whispered, easing back on the tiller.

When the boat touched shore, Jim’s hunting partner, Al already picked out a decent looking bull and touched off a shot.  Al’s rifle jammed leaving him to watch in disappointment as most of the herd disappeared off in the distance.  Jim was the next to try his luck. A strong wind pounding along the water, however, made it almost impossible for him to hold his rifle steady. Parker held as firmly as possible on the best looking ‘boo’ he could pick out, and to his great surprise miraculously pulled off a near 300 yard shot. The 170 grain slug found its mark in the animal’s neck, dropping it like a stone.  Jim had now broken the ice with his first ever caribou – a nice looking adult bull with a grey face.  The first animal proved to be a bad omen for the group as it was the last caribou they saw for several days.

After four long days of dragging their behinds over what felt like every rocky knoll in Northern Quebec, the hunters were ready for a change of scenery.  Safari Nordik staff agreed and the men were ushered into the Twin Otter float-plane, in the direction of an outpost camp called Rigouville. The change of venue is a service outfitters provide their clients in a situation such as a lag in the caribou migration.  What felt like minutes, the hunters were nearing their new destination on the fringe of the northern tree-line. 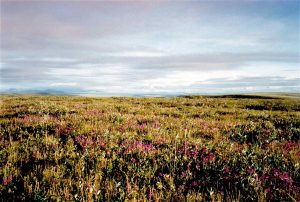 At the last second before touch down, however, the pilot was forced to veer off and re-attempt the approach to the Rigouville runway. Several caribou happened to be meandering across the landing strip, blocking the plane from landing.  Although it created for a scary moment or two before they touched down, everyone aboard was encouraged by the sight of animals in the vicinity.  As the plane came to a halt, the hunters and crew made short work of off-loading the gear.

The following morning by the time light began to peek through a small crack in his tent, Jim was already stirring.  He was itching to hit the tundra and raced through his breakfast to join the guide, Perry.  A short walk on the northern landscape brought the men to a long ridge overlooking a vast expanse of tundra.  They had only just settled in to glass the area, when a herd of caribou approached from their left. 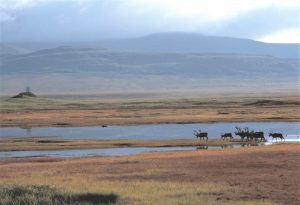 “We better move fast if we’re going to cut those ones off!” the guide instructed.  Without warning, he was off and running in an attempt to ambush the large herd of caribou.  Parker had no choice but to keep up, and it was all he good do to keep his traction on the slippery moss-covered landscape.  “I remember thinking how important it was to keep up with Perry, so I just kept going” Parker recalled.

Suddenly out of the corner of his eye, Jim caught a glimpse of antlers closing in on them.  “They’re just out on our left” Parker yelled over to Perry.  The men halted, and Perry quickly tried to size up the herd for a shooter.  “The third one from the left is a monster!”  Perry whispered, frantically.  “You better take him Jim, before he disappears”

In one fluid motion Parker shouldered his rifle, trying to centre the huge animal in his scope. Because of all the running and the heat generating from his rain-gear, the scope fogged up instantly.  Jim’s heart sank, as he wiped off the scope with one hand, and removed his rain jacket with the other.

The big bull sensed something was up, and slowly turning to escape.  With the lens now clear and the trophy of a lifetime standing broad-side, Jim knew it was now or never.  He slow-squeezed the trigger and it was over in a flash!  The hunter was filled with a rush of emotion as he and Perry walked up to the majestic animal lying peacefully on the tundra. 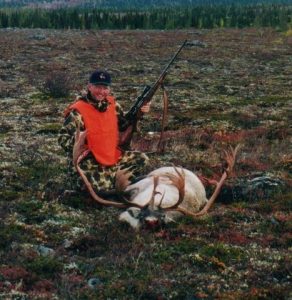 Never before had Jim seen such an impressive animal.  He was elated.  The caribou, a prime Leaf River Herd specimen, possessed everything a top notch animal should – long wide tops, good bez tines and a double shovel.  Instantly, Jim became aware that this creature was meant to be his, and that the trials and tribulations surrounding his trip to northern Quebec were not in vain. When it all came together, Jim Parker returned home with a trophy of a lifetime and memories to last an eternity. 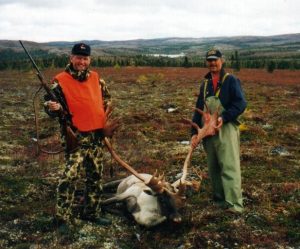 Jim Parker’s trophy caribou was scored for the Boone & Crockett club at an impressive 401 6/8” B&C.

Enjoy big-game hunting? Be sure to read my article on whitetail hunting in Michigan. 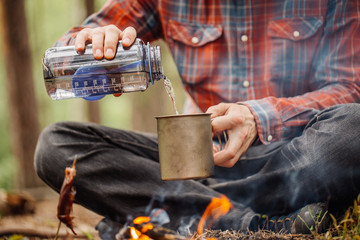 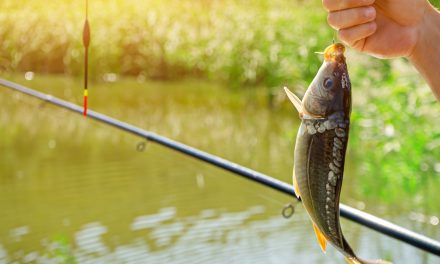 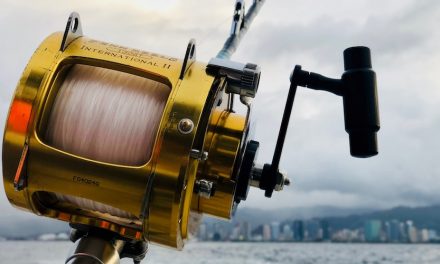